We have made it to April. The snow (of which we still have plenty) has melted down enough that we have been able to start pruning  again.  It has been too deep to get out in the orchard since early January.  February average temperature was 5 degrees and it was coldest recorded month ever.

The new chipper is making brush clean up much faster – we need to be faster to get the remaining 500 trees pruned. 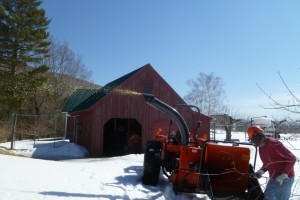 The weather has not been cold enough to damage the trees  – fruit buds should be fine for the apples and probably ok for the cherries.  Raspberries have been covered with deep snow and we have not had freezing/thawing that sometimes causes damage. Bloom will be late this year – probably sometime in second half of May – there are plenty of fruit buds.

We are looking forward to Spring !!!

All is well with the orchard – more than enough snow.  We still have a lot of pruning  to do, but it has been too cold to get out – have spent the time instead getting our taxes done.  Looks like pruning will wait until March.

Fortunately the heavy snow (and some ice) has not damaged the apple trees.  Because the trees are pruned each year and the heavy fruit load each fall, the limbs are strong enough to avoid much breakage.  It has been a different story for the trees in the surrounding woods and our standby generator has run a couple of times for almost a day.

We are looking forward to Spring – it will have to come sometime. 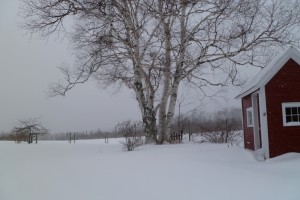 We hope that social distancing and masks will be relics of the past at harvest for 2022
–
Apple picking for 2021 will start Saturday September 4 .  Learn about our varieties and check our availability chart here.
–
IN SEASON HOURS
9 AM to 5:30 PM
Closed Mondays
Directions Email Us