We are a little over two months away from the start of apple harvest which will be  around Labor Day weekend.  The overall crop this year will be somewhat less than last year due to uneven bloom on some trees and the cold weather at the end of April.  The number of apples set on Honeycrisp trees is very spotty and Honeycrisp crop will probably be about 1/2 of last year’s crop.  There will still be good apples – just not as many.  Macintosh will be good this year.  Zestars look like our biggest crop yet.   As always everything is weather dependent so there are no complete guarantees.

We have been fortunate to get good amounts of rain this year and so far have not had any damaging storms – a lot of the storms seem to go farther north – possibly deflected by the Taconic mountain range to our west.

One big job at this time of year is mowing throughout the orchard to reduce competition by the grass for water and nutrients (and repairing broken mowers as needed).  Second big job is hand thinning the apples on some trees that are overset so that branches will not break and the remaining fruit will be fully sized. One photo shows hand thinning on a young Golden Delicious tree where the apples are approaching one inch size  and the other photo is a view down the valley while we enjoy some coffee – working outdoors in the sun at 60 degrees is not ALL bad.

Keep us on your fall calendar !!

It has finally warmed up and several days with high temperatures in the 80’s have pushed the bloom along and the petals are starting to fall.  We survived the 24 degree morning on April 22 because the buds were still not fully open.  We have had several days of good pollination weather.  Honeycrisp crop will be light this year – overall it looks like probably about 80% of our record crop last year.

Four months to go and a lot depends on the weather, but having a reasonable amount of bloom and good pollination is a good start.  Stay tuned for updates.

We took advantage of the bloom and some sunshine to take some pictures of some of Sylvia’s quilts. 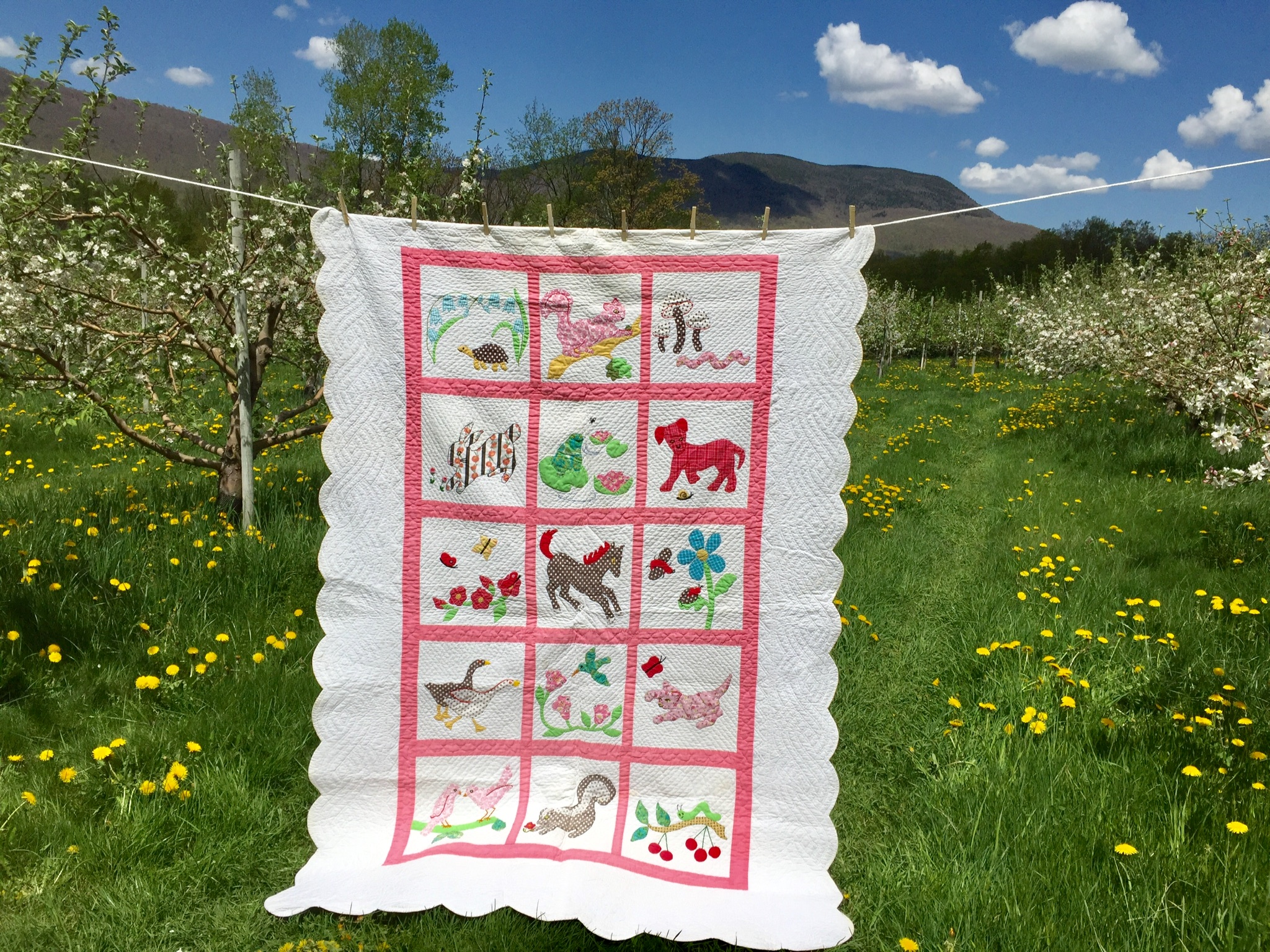 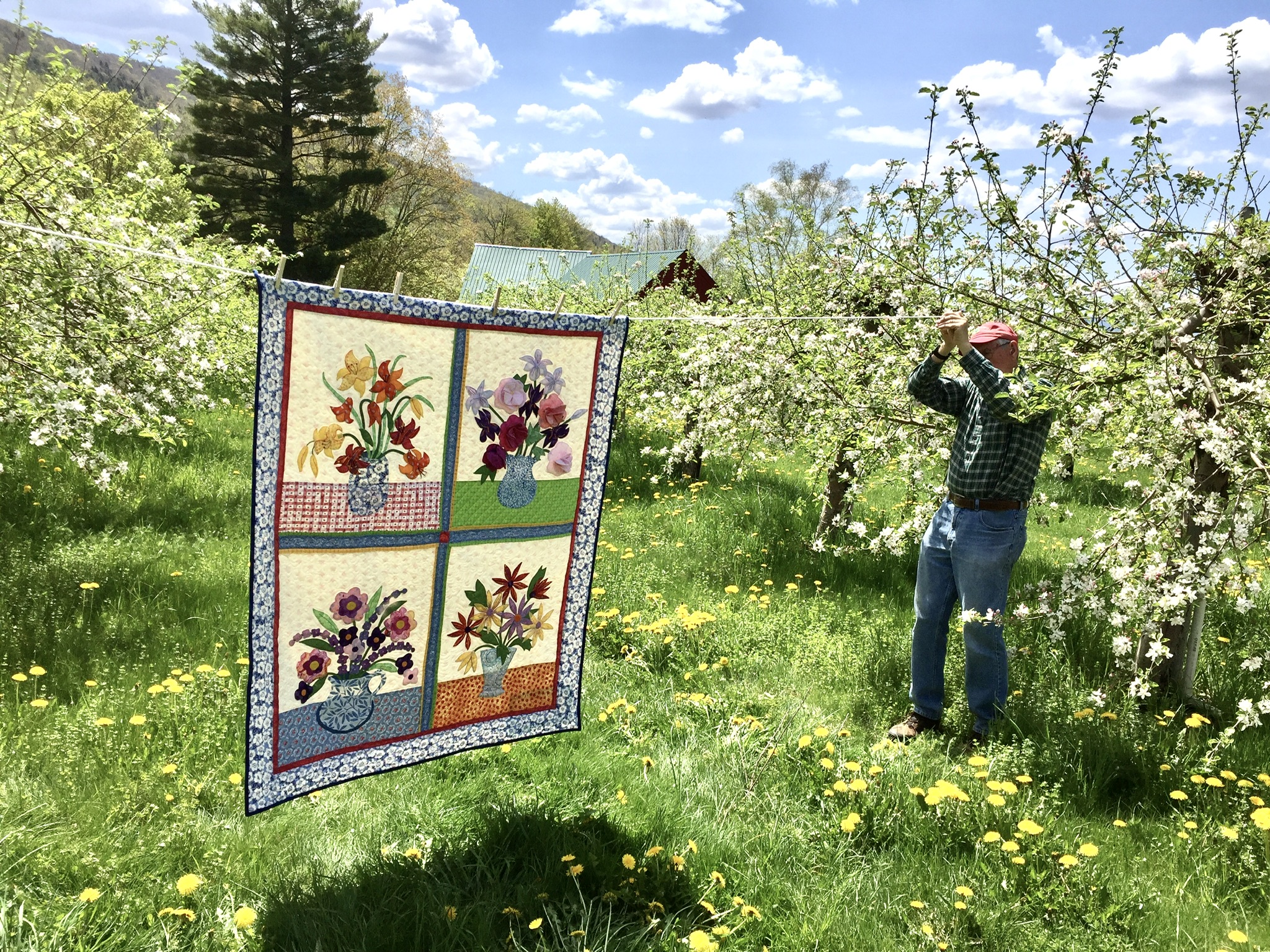 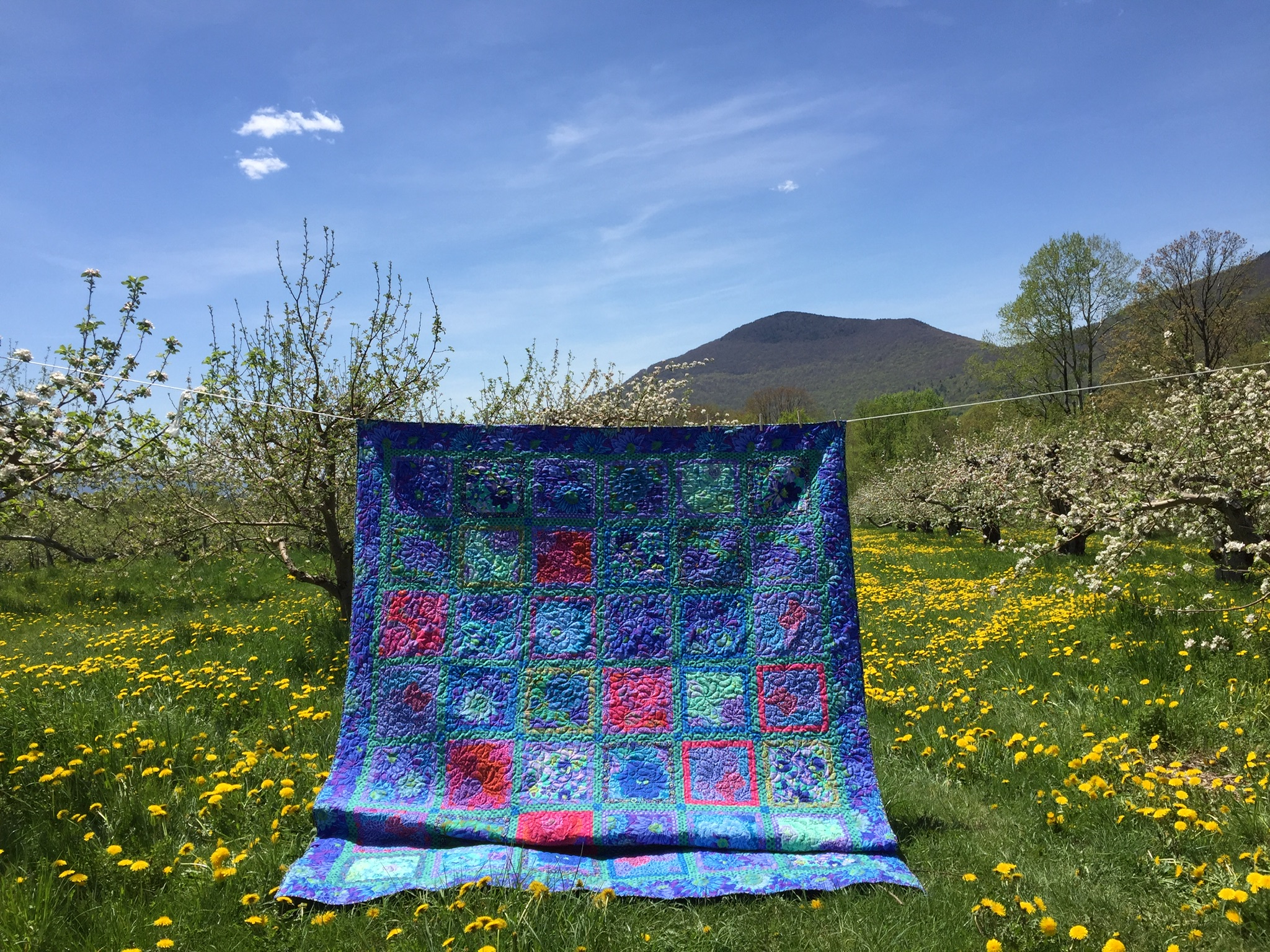 So by late March, the snow had melted and we were able to almost finish pruning – warm temperatures in early April pushed the apple buds along and we were showing green tip leaves two weeks earlier than normal.

We put our first copper and oil spray down on April 10’th – earliest ever.   We managed to get all the brush picked up and run thru the big chipper – older backs take increasing notice of the bending over.

Then last night and today we have had about five inches of new snow – supposed to rain tonight and melt it all off.  The early season increases the potential for frost damage later, but so far we are ok.  Buds at full green tip can survive with limited damage down to 25 degrees.

In the middle of all this, in early April we made our first trip back to Boston in over a year for more scans and a bone marrow biopsy which came back with good results.  Got to see both our Massachusetts based daughters and their kids as a bonus.

So now when the snow melts we will clean up the last of the pruning, replace the cracked valve to restart the irrigation system and rebuild the shelters for the bumblebees before they arrive. 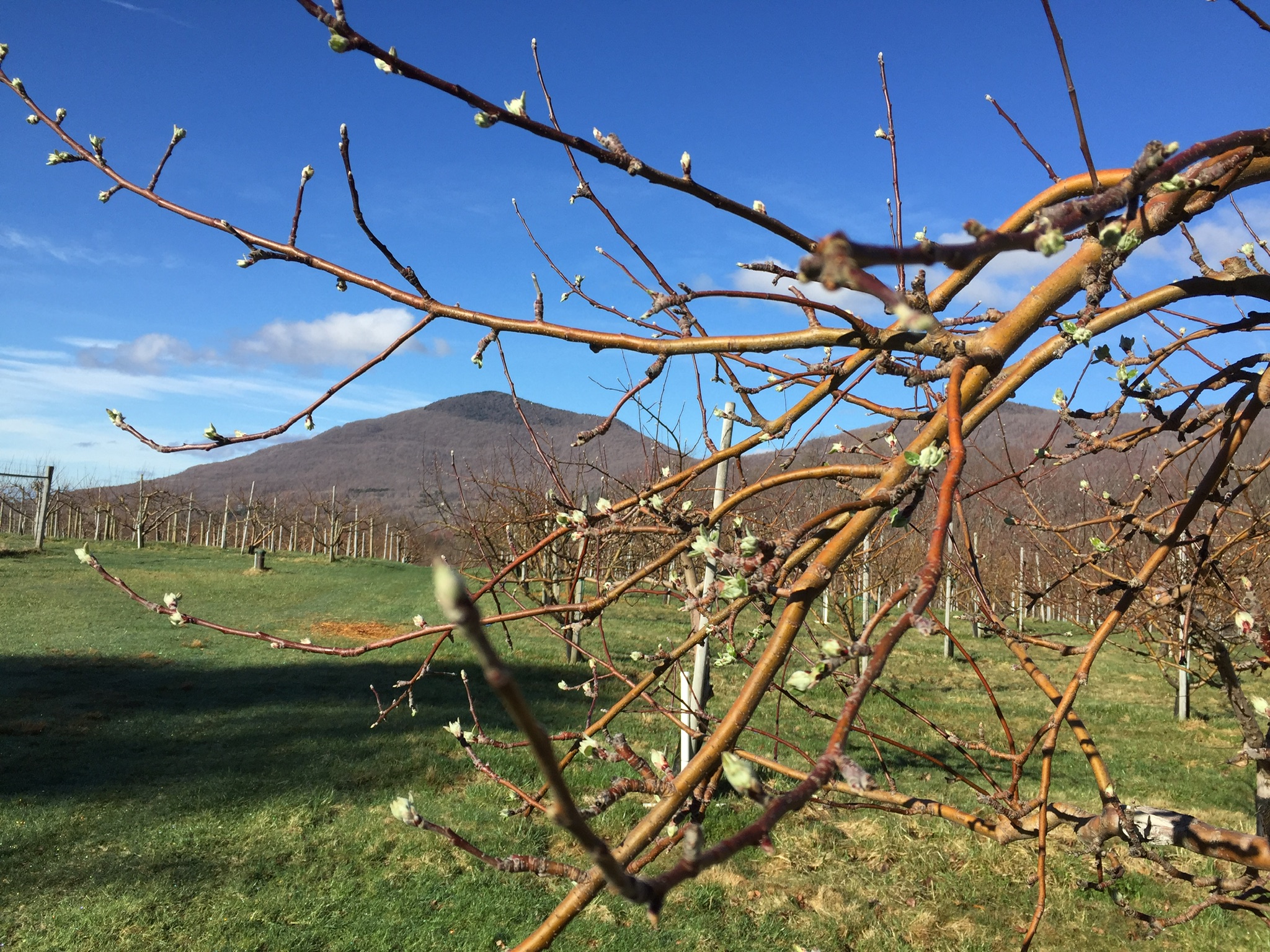 Feeding brush into the chipper 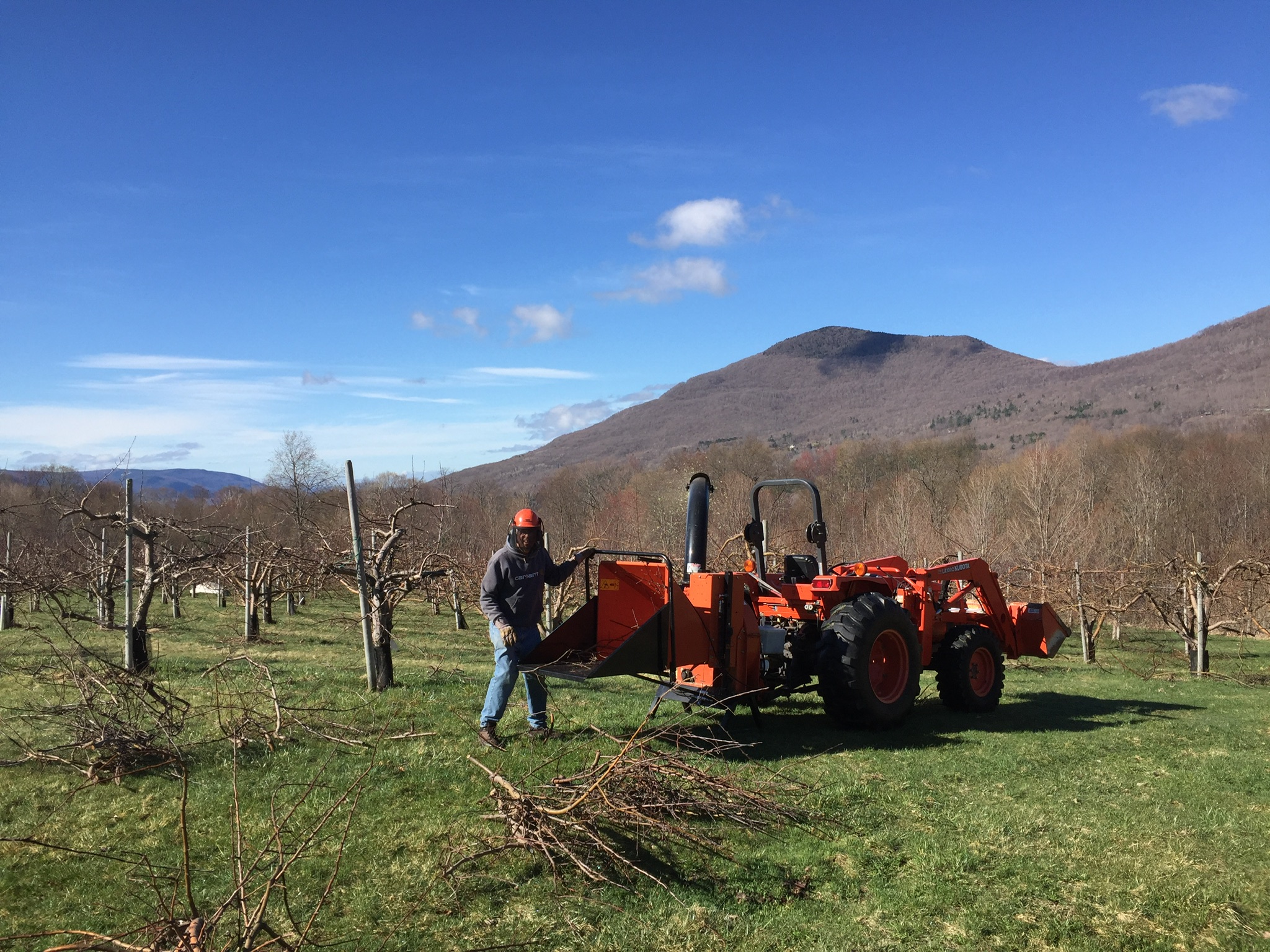 Brief detour back to winter – daffodils in there somewhere 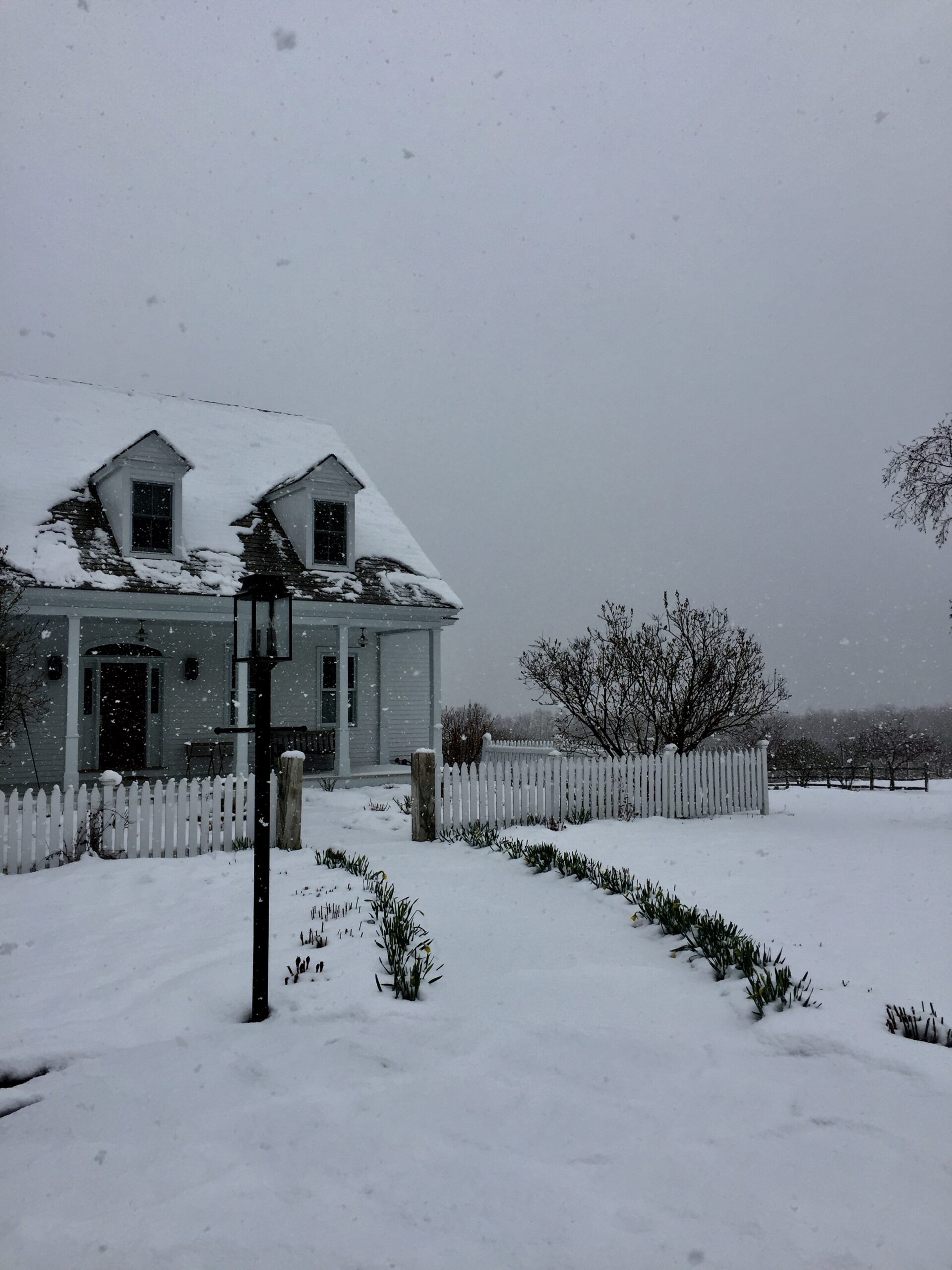 Hope this finds everyone well – we have weathered the winter well, though the lockdown made it seem seem VERY long.  Sylvia and I both had our second vaccinations two weeks ago.   My February birthday marked the beginning of a new decade.

After the big snow in December all melted in a week before Christmas, winter came back with numerous 4, 6 or 8 inch snow falls that soon built up to 2 or more feet covering the ground in the orchard which put our pruning on hold until this week.  Snow is melted in many places and under 6 inches elsewhere, so we have been able to get out and resume pruning – when that is done, we need to pick up all the brush and feed it through the chipper.  We took advantage of a windy day to burn the brush pile.

So we are starting growing our 20’th crop since reopening the orchard.  The fruit buds look  good which is the first requirement for a good crop.  We hope that by Fall we will be able to see you all with fewer restrictions than last Fall. 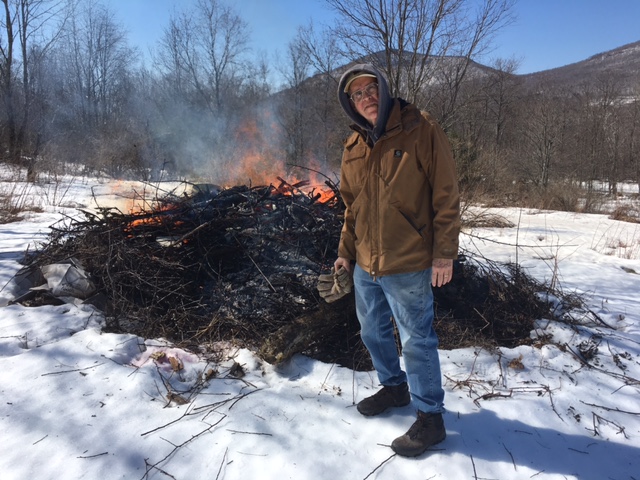 The scene today is very different from my last post on October 3 – we had 42 inches of snow  in less than 24 hours two days ago on December 17 – the most snow we have seen in a single day in the 21 years back living in Vermont.  Fortunately the snow was dry and light AND I had the snow plow mounted on the John Deere tractor.

We have cleaned up after the accelerated four week harvest, the orchard had its final mowing , the equipment has all been put back in the barns and some pruning is started.  More pruning will have to wait until enough snow melts so that we can shovel out a gate to get into the orchard.  There appear to be a good number of fruit buds on the trees and we are looking forward to growing our 20’th crop since reopening the orchard and seeing you in the Fall.

We will be doing Zoom Christmas gatherings with our kids and grandkids – all the packages are mailed and appear to have arrived.  Fortunately everyone is healthy and we are as well.  We are looking forward to a better year in 2021 as vaccines become available and family visits can resume.  Hope this finds you and family well and that you are able to enjoy the Holidays. 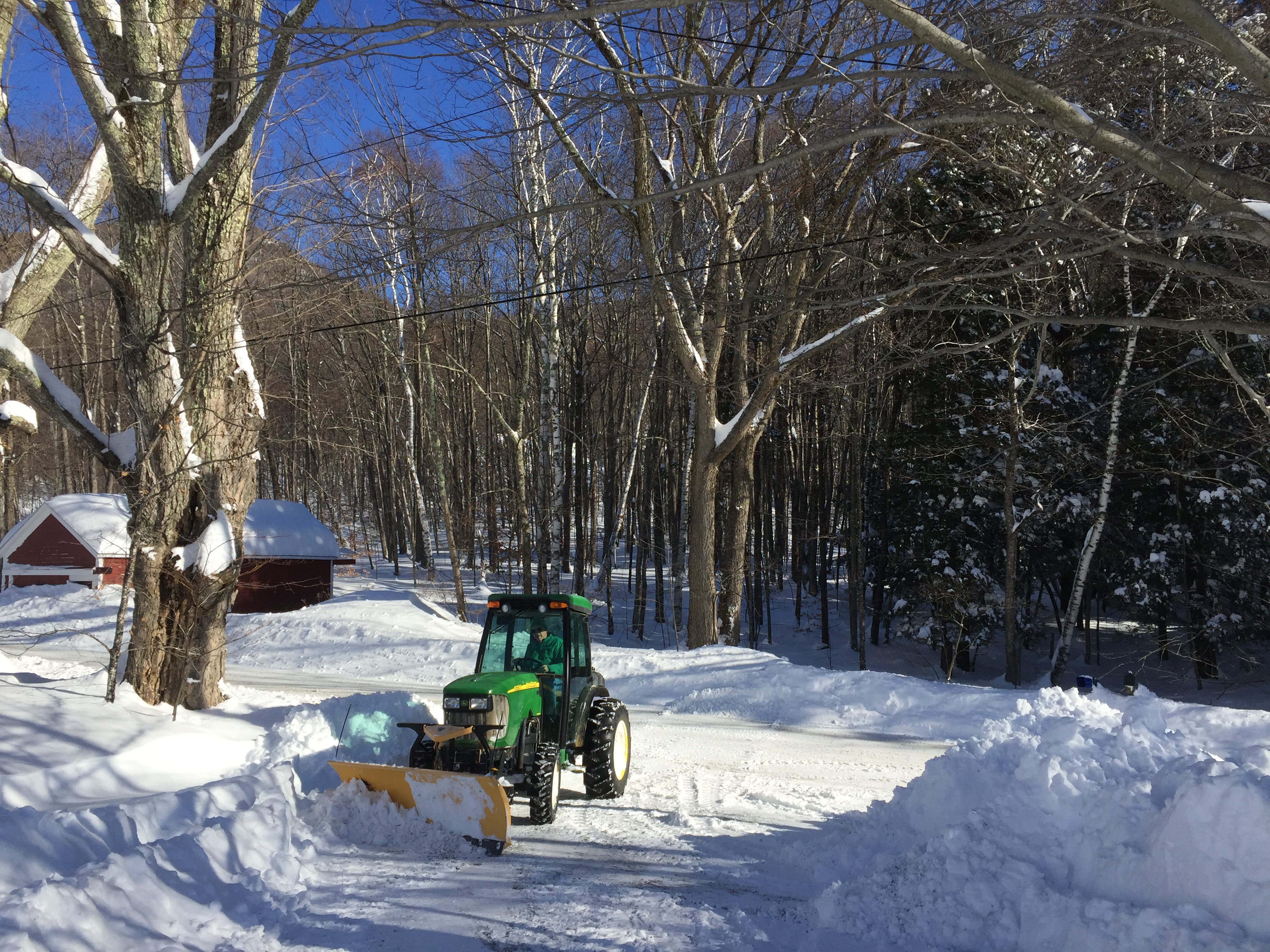 The old Macintosh trees are holding up well 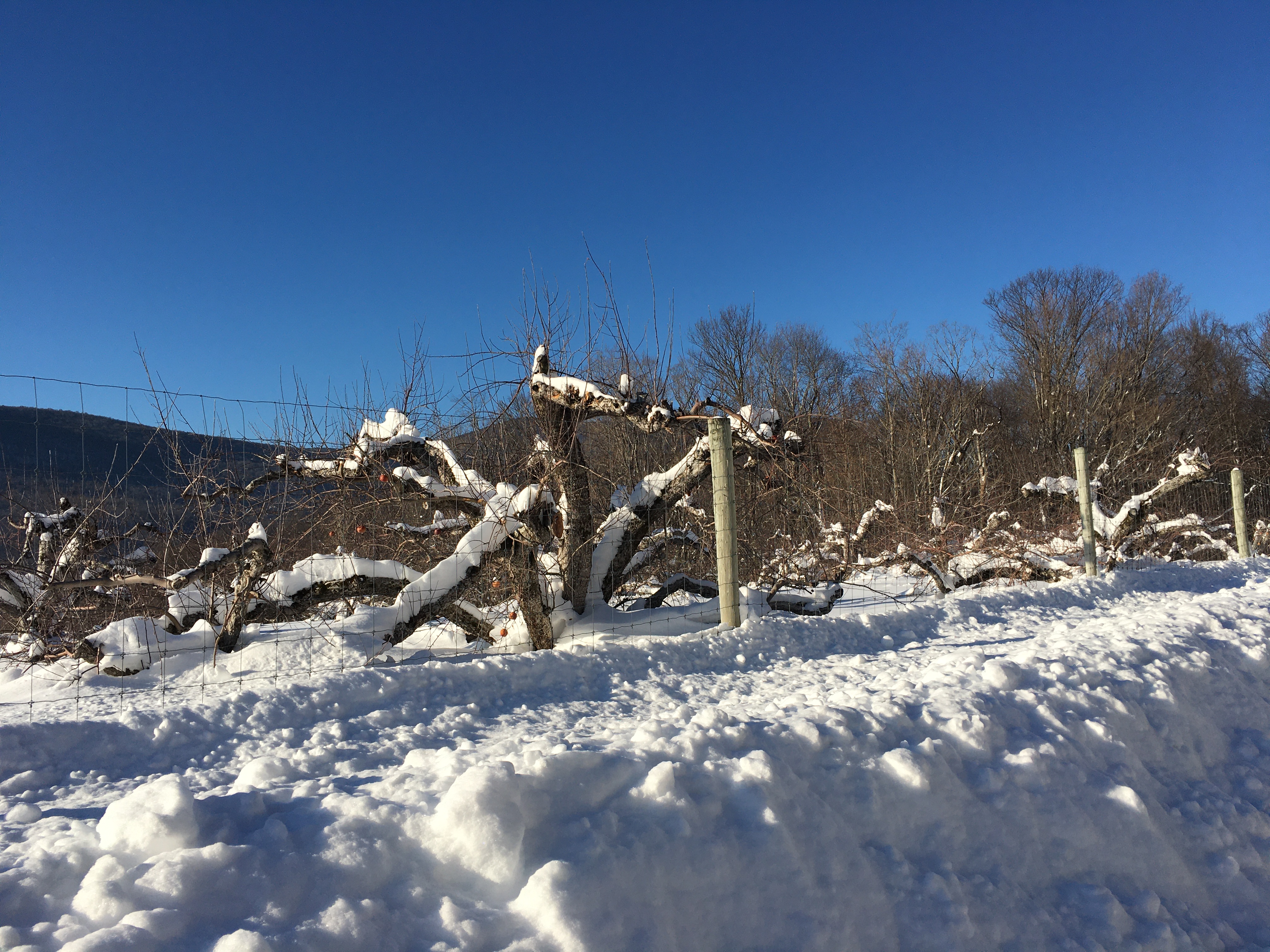 We hope that social distancing and masks will be relics of the past at harvest for 2021
–
Apple picking for 2021 will start around Labor Day .  Learn about our varieties and check our availability chart here.
–
IN SEASON HOURS
9 AM to 5:30 PM
Closed Mondays
Directions Email Us